How to Get Better Sleep in College

College offers a million reasons to stay up later than you should. But here's the thing you probably already know: You need your sleep.

Sleep can be the X-factor for college students. Getting 7-9 hours of sleep promotes short- and long-term memory building, reduces stress, and can help you perform better in the classroom.

But college students usually don't get to bed on time. A study in 2017 found that 1 in 6 students suffers from lack of sleep, which impacts their daily life and potentially harms their grade point average.

It's understandable if you occasionally stay up to cram before a test or hang out with friends, but making it a habit can have negative consequences, such as less energy, a weaker immune system, and a cloudy mood.

Though early birds and night owls feel different effects of sleep deprivation, both can benefit from a better night's rest. According to researchers at RWTH Aachen University, about 10% of people are early risers, 20% are late risers, and the rest fall somewhere in between.

There's also a group of people known as sleep procrastinators, who either struggle to get in bed or sacrifice their sleep to make up for a lack of free time. They could use more sleep, too.

To learn more, we asked sleep specialists Teresa Ward — a sleep researcher at the University of Washington — and Alex Dimitriu — founder of the Menlo Park Psychiatry and Sleep Medicine clinic — to share some tips for how early birds, night owls, and sleep procrastinators can get better sleep in college. 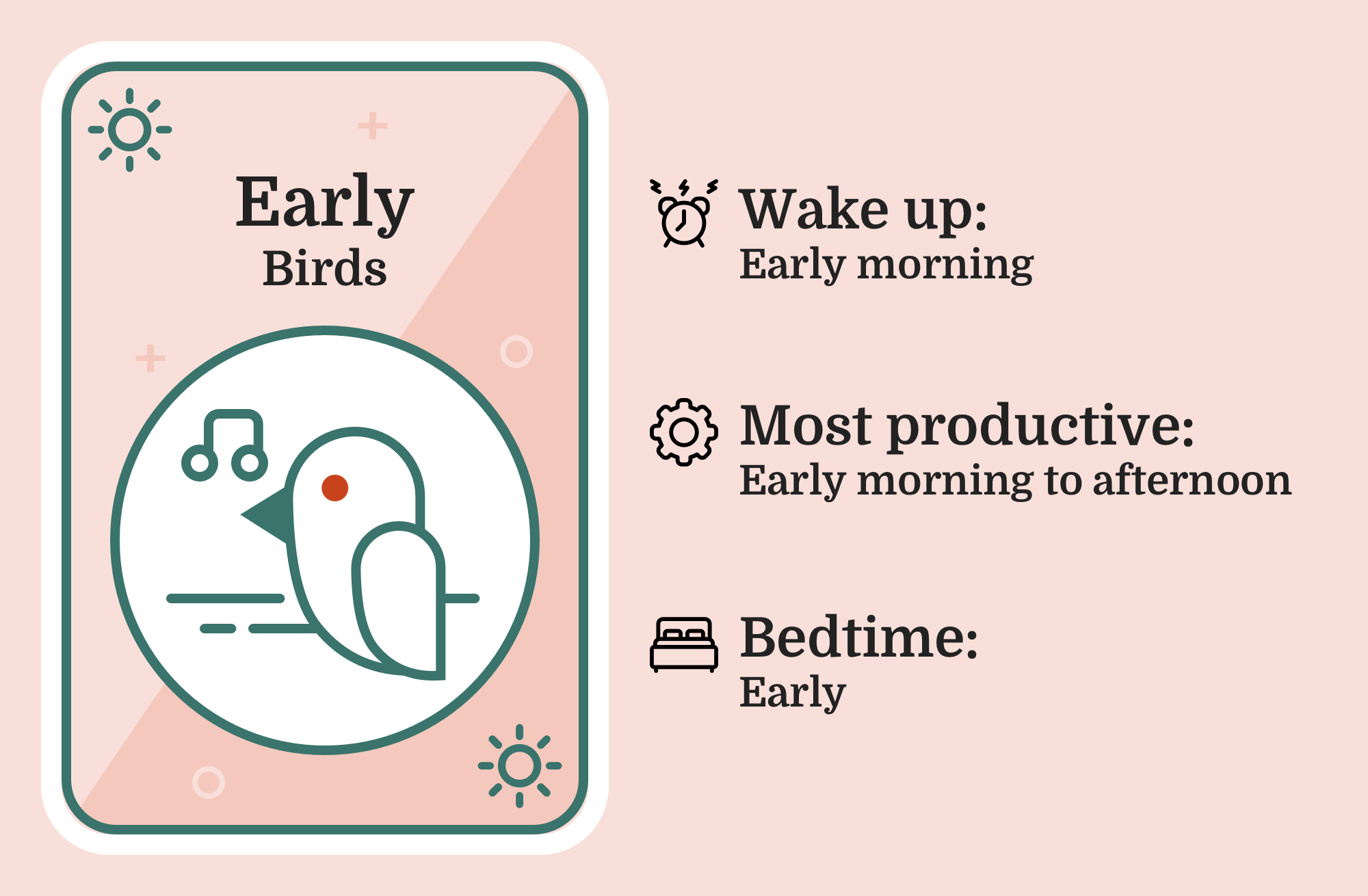 You might be an early bird if: You're in bed before everyone else and the first to rise the next day. Getting up in the morning is a breeze — even without an alarm clock. Within 30 minutes of waking up, you feel alert, refreshed, and ready to start the day. You're most productive in the morning. Naturally, you also feel sleepy earlier in the evening. Going to bed around 10 p.m. or even before is the norm.

Stick to your sleep rhythm: Just because you're in college doesn't mean you have to go to bed later at night.

"If you're aware that you tend to get drowsy at 10 or 11 and you tend to want to wake up at 7, then stick to that," Dimitriu said. "Don't fight it. Fit your schedule around that to optimize it."

If you struggle with getting to bed on time: See if you can move things around on your schedule so you can prioritize sleep.

"Map out your day and what you're doing," Ward said. "If there's some space where you could probably start some of your homework a little earlier, that might free up an hour of your time in the evening." 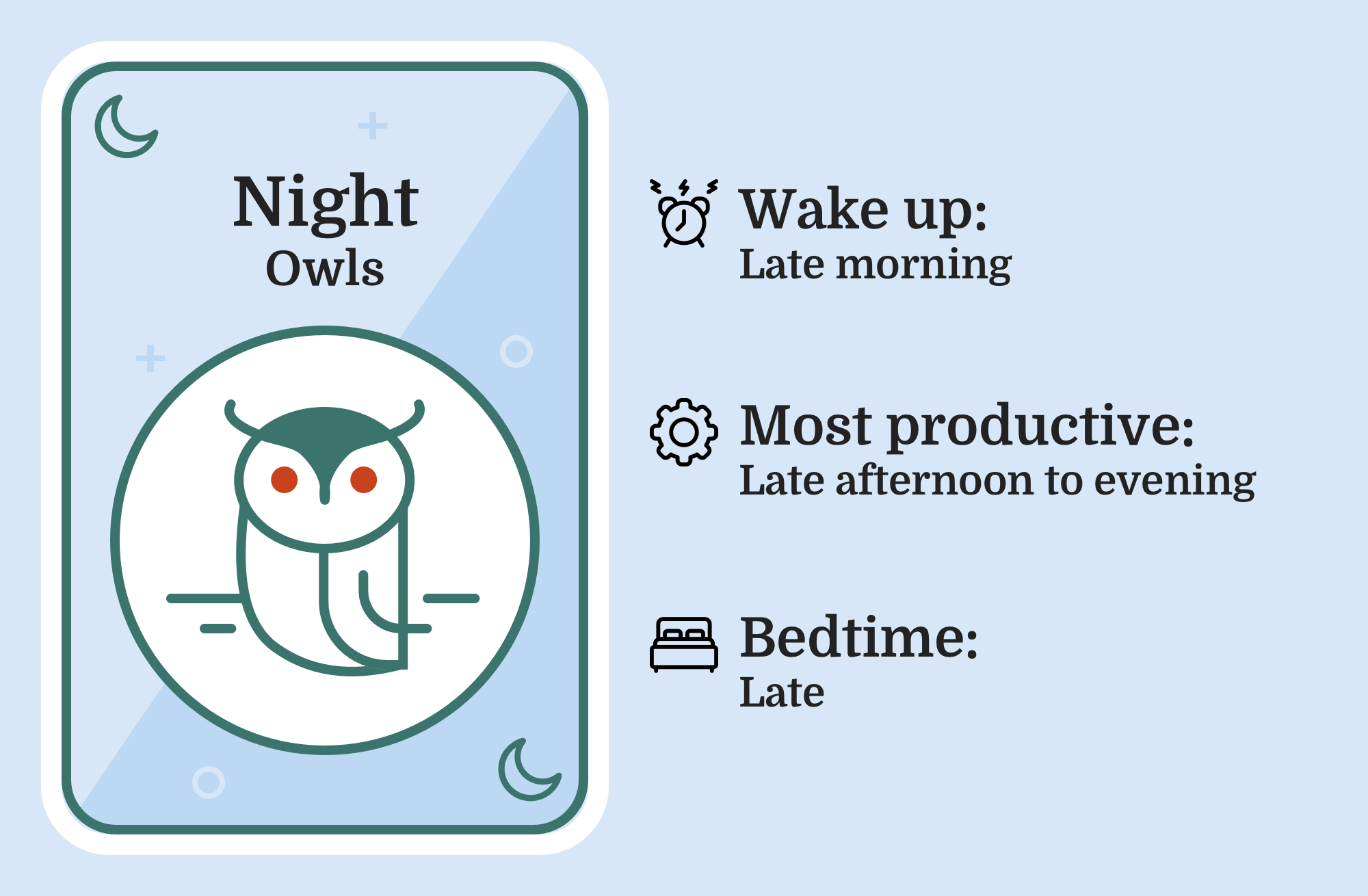 You might be a night owl if: You go to bed well into the wee hours and are still asleep when the rest of the world starts its day. Mornings are foggy and typically unproductive. It's usually early afternoon when you feel like your day has fully begun, and the late afternoon or early evening is when you start to hit your stride. You tend to do your best work late at night.

Don't push it with late nights: You may tend to perform well in the evening, but going overboard won't help you in the long run.

"A lot of night owls report that some of their best performance is at night," Dimitriu said. "Certainly, if that fits you, that's okay. Just don't let night classes also turn into a pattern of going to bed at 4 a.m. and sleeping till noon."

If you struggle with getting to bed on time: Change your nighttime routine to avoid conflicts that keep you from getting a full night's rest.

"Adjust things that get in the way with competing for sleep," Ward said. "If it's an extracurricular activity, you curtail that. Or take a night off." 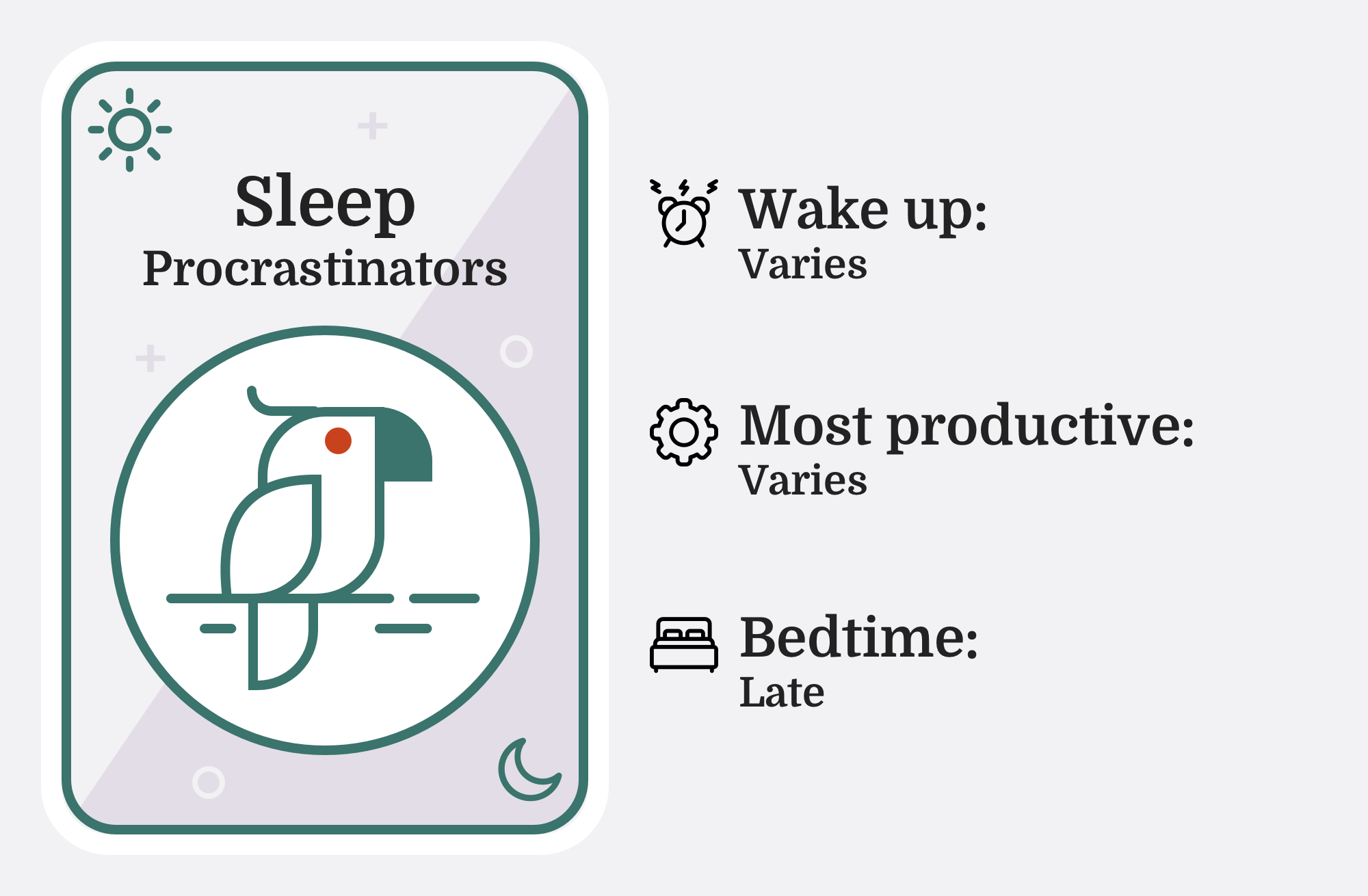 You might be a sleep procrastinator if: You're always tired in the morning, and sometimes even groggier in the afternoon. Being productive or creative at night doesn't come easy. You put off sleep to play video games, spend time with friends, or browse on your phone or computer. Your sleep cycles vary from decent to poor, from six hours of sleep one night to four the next.

Keep your wake-up time the same: Different waking times will throw off your sleep rhythm.

"That's the most challenging part, because people want to sleep in," Ward said. "Keep the wake up time the same, regardless. Because what you're trying to do is shift your clock a little bit, and it's going to adjust your internal clock. What'll happen is, you're going to be tired. You're going to be hopefully tired a little bit earlier in the evening hours, so you'll eventually fall asleep earlier."

Get off your phone: Looking at your phone late at night can be bad for sleep. Make a conscious effort to put it away at least 30 minutes before bed.

"It's at night that people eat too many potato chips, watch too many YouTube videos, and also read too many pieces of nonsense on their phone," Dimitriu said. "The metric I use for that is, 'What do you remember the next day that you read last night?' If the answer is like 10% of it, then you're wasting your time."

Evan Thompson is a Washington-based writer for TBS covering higher education. He has bylines in the Seattle Times, Tacoma News Tribune, Everett Herald, and others from his past life as a newspaper reporter.